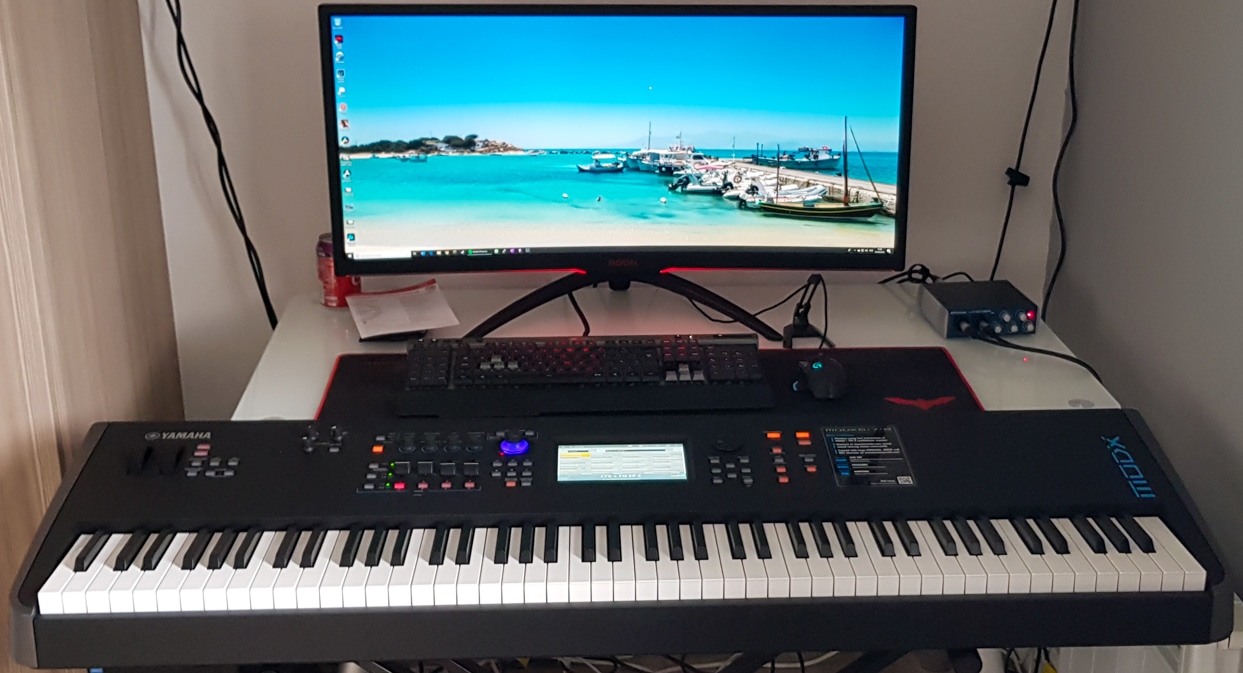 It’s fair to say I’m not very good at keeping this blog up-to-date, but I’m going to try harder (honest!) from now on.

I’ve been lucky enough to invest in a few new things recently, so I’ll go through them bit-by-bit and explain what’s what.

New Piano or No?

I sold my old Kawai CN2 digital piano a couple of years ago as I didn’t have space for it in my flat. I also wasn’t playing it regularly, so it really just sat gathering dust. Fast-forward to a few weeks ago, I now have a larger 2-bedroom apartment so there’s room for a piano again! However, I wanted something a bit more compact so I could store it easily when I needed the space. Also, being a keen fan of EDM (dance) music, I liked the idea of having something I could use with my computer to make electronic music and figured it would give me another motivation to improve my keyboard skills.

I spent quite a bit of time researching a suitable keyboard, especially given the cost would likely be around a thousand pounds. The requirements were:

I was given several recommendations online, including a Roland RD2000, Kawai MP7SE, Nord Piano/Stage 3, Yamaha Montage and several others. The Nord Stage 3 seemed fantastic, but the hefty price tag made it a non-starter. Likewise, with the Montage, it seemed great but there was no way I could justify the £2k+ price tag on something I can’t even play all that well.

I eventually stumbled across the MODX on YouTube, and on learning that it was basically a cut-price Montage but with 90% of the same functionality, I knew I’d found the keyboard for me.

I was actually prepared to buy the keyboard without trying it, based purely on the positive reviews and YouTube videos, I was sure it more than met my requirements. On the off-chance though that I could find somewhere in East Anglia who stocked it, I had a look online and discovered PMT (the music store, not a woman’s monthly hormonal issues), https://www.pmtonline.co.uk/stores/norwich/. I’ve lived in, or close to, Norwich most of my life and had no idea this shop existed!

Sadly, they didn’t have a MODX8 in store, but they had the Montage and I figured it would be close enough to get an idea of what the MODX would be like. I popped down one Sunday afternoon, had a tinker with it and as expected, thought it was amazing. All this happened shortly before my July holiday, so having expressed an interest to the keyboard guy at PMT, I told him I’d be back again to put the order in.

Fast-forward another couple of weeks, I returned to PMT and began the exciting process of ordering lots of kit! Unfortunately, the MODX was on back-order with Yamaha, so they promised to update me with an ETA on stock, and in the meantime, I took ownership of some decent studio monitor speakers, keyboard stand, a USB audio interface, and cables to hook everything together:

The speakers are Yamaha HS5s, recommended by PMT (and confirmed by some quick research online), and the interface is a Presonus Audiobox USB 96. The reason for the interface is so I can use the speakers as standalone for the PC, as well as routing the keyboard to them for playback and recording.

The speakers are fantastic: the volume level is perfect for my small office space (they would easily disturb my neighbours if I wanted to) and the quality of sound is far better than any speakers I’ve owned before.

Sadly, PMT was unable to source the MODX until November due to a UK-wide shortage and backlog at Yamaha. After finding this out a few days after ordering, I began searching online to see if any other retailers had them in stock. I managed to find a couple of places, but the sale went to Hogan Music, who not only had stock but were £50 cheaper than PMT as well, bonus! I placed the order on a Friday and it arrived mid-afternoon the following Monday.

The only slight disappointment after setting the keyboard up was discovering it didn’t come with a sustain pedal, as I’d been expecting. For the amount it cost, not including one seems stingy, but I suppose not all keyboard players use them. I looked online and the official Yamaha FC4A sustain pedal was over £50, so I opted for a cheaper version and bought this instead:

It’s the M-Audio SP-2 Universal Sustain Pedal, and cost just £14 – a bargain. It arrived the next day (good old Amazon Prime) and so far it’s been perfect and feels great to use.

All that’s left now is learning how to get the most out of the MODX. Oh, and remembering how to play the keyboard…stay tuned!